In the Summer 2022 issue of Army History, we are pleased to offer two new articles, a quality selection of book reviews, a look at some unique Army art, and the unveiling of a new exhibit at the National Infantry Museum.

The first article, by Gene Fax, evaluates the American World War I combat experience in the Meuse-Argonne with that of the British army during the Battle of the Somme. Fax argues that the mental image of “futile carnage” that dominated postwar depictions of the fighting came largely from British fiction, nonfiction, and theater. He also illustrates that the “endless futility” of the war’s early years usually did not hamper American Expeditionary Forces’ battlefield performance, even though the Americans often ignored or dismissed lessons and techniques offered by their British and French allies that had been learned the hard way.

The second article is a commentary from George Goethals. Goethals, a professor of leadership studies at the University of Richmond, provides of critique of Col. Joshua Lawrence Chamberlain and his actions at the Battle of Gettysburg as the commander of the 20th Maine Volunteer Infantry—actions that were ultimately crucial to Union victory. Most students of history know well Chamberlain’s exploits on Little Round Top, but some may not know about the episode with the “mutineers” from the 2d Maine shortly before the battle. Goethals studies Chamberlain’s interactions with the 2d Maine and their delegate, as depicted in the novel Killer Angels by Michael Shaara and later the movie Gettysburg. Through these fictional accounts, which Goethals points out are based on relevant histories, he suggests how Chamberlain may have established his authority and legitimacy effectively over the men of the 2d Maine.

Recently, there has been some internal reorganization here at the Center of Military History (CMH). Our Historical Products Division that produces Army History, among other things, has been renamed the Multimedia and Publications Division (MPD). MPD has been moved out from under the Histories Directorate and now reports directly to the CMH Headquarters and the deputy director. In addition, MPD also absorbed the CMH Strategic Initiatives Group, which includes the Center’s website and some of its social media content creation responsibilities. This move will allow MPD to serve better CMH as a whole, as well as customers within the Army Museum Enterprise, and the Army at large. It will not affect the publication of Army History in any way.

On a side note, Army History has not been immune from the supply chain issues affecting most of the country. Many printers are having difficulties securing paper in a timely manner and this has already led to some brief delays in printing and distributing the last couple of issues. Army History readers should know that we will make every effort to get our issues out to you on time and on target. 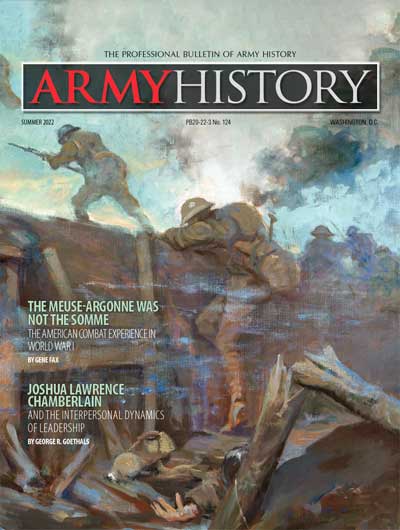