The Origin of the U.S. Army Flag

This page is also part of June 14th: The Birthday of the U.S. Army 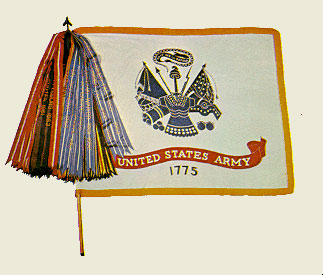 The Army flag was dedicated and unfurled to the general public on 14 June 1956 at Independence Hall, Philadelphia, on the 181st anniversary of the establishment of the U.S. Army by the Continental Congress in 1775. Measuring 4 feet 4 inches by 5 feet 6 inches, the flag is of white silk with a blue embroidered central design of the original War Office seal. "United States Army" is inscribed in white letters on a scarlet scroll, with the year "1775" in blue numerals below. The Secretary of the Army designates the Army headquarters and agencies authorized an Army Flag.