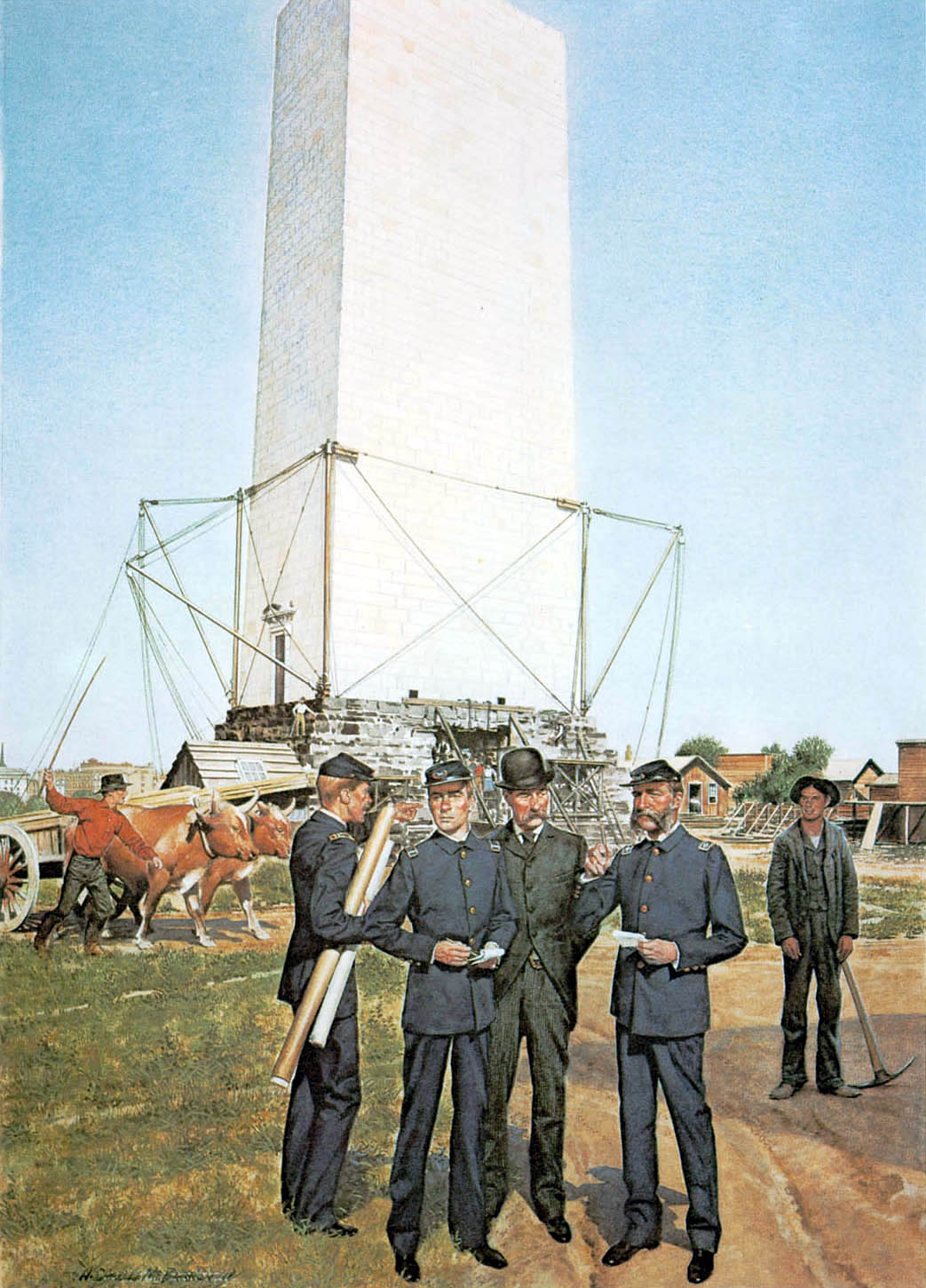 In 1833 the Washington National Monument Society, a private organization, declared its intention to follow through on a Congressional resolution, passed after the American victory at Yorktown, authorizing the construction of a statue to honor George Washington. The resolution had not been acted on because Washington objected to the use of public funds for such a project. With a great deal of public support, the organization raised money and in 1848 persuaded Congress to set aside land for a monument. The legislators agreed and authorized a site near the location L'Enfant, the designer of the federal city, had long ago designated for a statue of Washington. That same year work commenced on the fourth of July with the setting of a 24,000 pound marble cornerstone.

Eleven years later with work still in progress, the Secretary of War received a request from the society for an officer of the Corps of Engineers to direct the construction. Lieutenant J. C. Ives received the assignment which lasted for only one year when, at a height of 156 feet, work came to a halt because of a lack of funds and the impending Civil War.

The society continued in existence and in 1874 asked the Chief of Engineers to inspect the shaft in preparation for resuming work. Two years later Congress approved funding and assumed public ownership of the obelisk. After re-examination of the structure in 1878, a decision was made to strengthen the foundation. Lieutenant Colonel Thomas L. Casey, who had constructed fortifications during the Civil War, took charge of the project. He had fifty-one percent of the old foundation replaced and enlarged from 6,400 to 16,000 square feet. At the same time Casey corrected a deflection in the shaft, a remarkable engineering feat at the time for a structure weighing about 81,000 tons.

On 21 February 1885 at the dedication ceremony workmen placed a solid aluminum capstone on the peak of the obelisk. Ending his speech, Casey addressed President Chester A. Arthur, "For and in behalf of the joint Commission for the completion of the Washington Monument, I deliver to you this column."

At the base of the partially completed monument Lieutenant Colonel Casey discusses details of the construction with one of the civilian contractors. Two junior Engineer officers wait to speak to Casey while one of the laborers employed by the contractor looks on. Both Casey and the two junior officers wear the officer's undress uniform of the period; a dark blue single breasted sack coat with five convex gilt buttons in front and a small falling collar, and plain dark blue trousers. The gold laurel and palm wreath encircling the silver castle on the front of the dark blue forage cap identifies them as Engineers, while their rank is shown by the insignia on their dark blue, general staff shoulder straps.