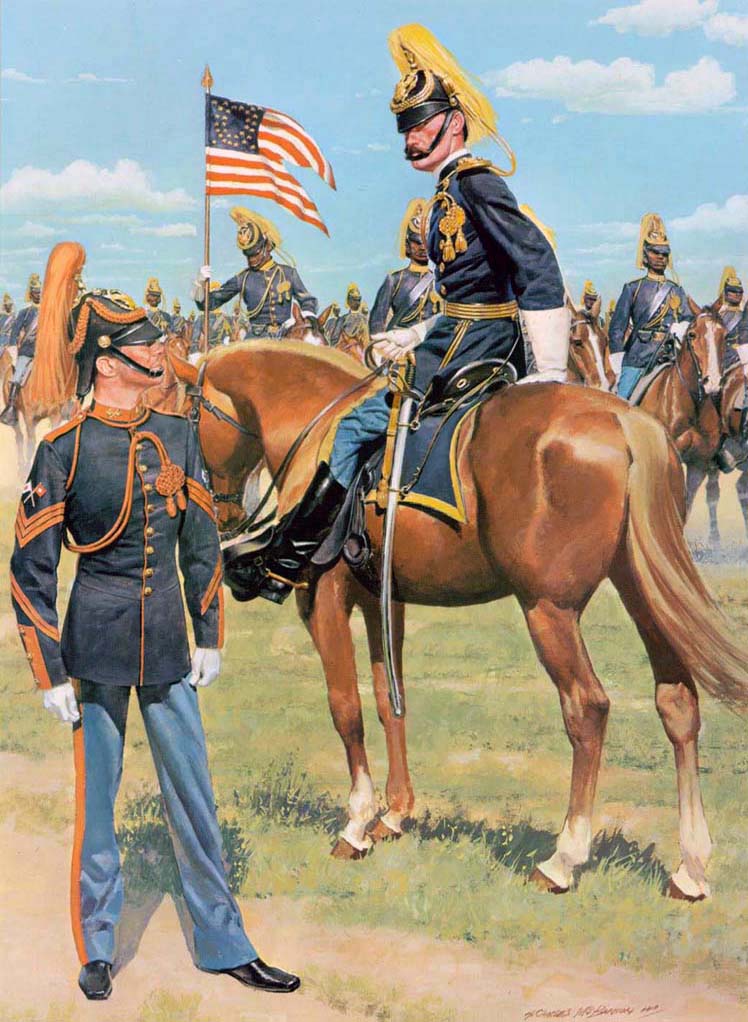 The U.S. Army, which emerged from the Civil War to take the lead in taming the last frontiers of the continental United States, soon became again the frontier Army of the era before the Civil War. The victorious Union Army in 1865 was one of the world's strongest and most modern, but as the Civil War had radically changed the "old Army," now postwar Indian combat and exploration changed the wartime Army.

The trend toward a distinctive uniform for the field and another for dress or ceremonial occasions continued. The dress uniform adopted by the Army in 1872 attempted to achieve in appearance the elegance of those of the leading European armies of the day. Typical of this era were those worn on duty in New Mexico about 1880.

A sergeant of the Signal Corps is in the left foreground. He is wearing a dark blue, form fitting "Basque" coat with the shorter skirts prescribed for mounted troops. Both his coat and his light blue trousers are trimmed in orange, the branch color of the Signal Corps. The chevrons designating his rank and the diagonal service stripes on his lower sleeve are also orange. On his collar and sleeves he wears crossed signal flags, the insignia of the Signal Corps since its formation in 1861; those on the collar are in gilt, those on the sleeves in red and white embroidery. His cavalry-style black felt helmet, with its orange plume and orange cords, is one of the distinctive features of the Army dress of the period. Adopted in 1872 from the British Army, the helmet was originally only intended for U.S. mounted troops. Its use was later extended to all of the Army and, in the modified form adopted in 1881, was worn until after the turn of the century.

In the center foreground is a captain of the 9th Cavalry in the plain, dark blue coat and light blue trousers worn by all officers. His arm of service is indicated by the yellow plume and gold cords and tassels on his helmet, his gold shoulder knots,and the white gauntlets and black boots of the mounted soldier. His saddlecloth is dark blue with a gold border.

In the background are troopers of the 9th Cavalry in dark blue coats trimmed with yellow, light blue trousers, and black leather belts and carbine slings. The guidon bearer carries the stars and stripes swallow-tailed guidon adopted after the outbreak of the Civil War to replace the red and white cavalry flag then in use.