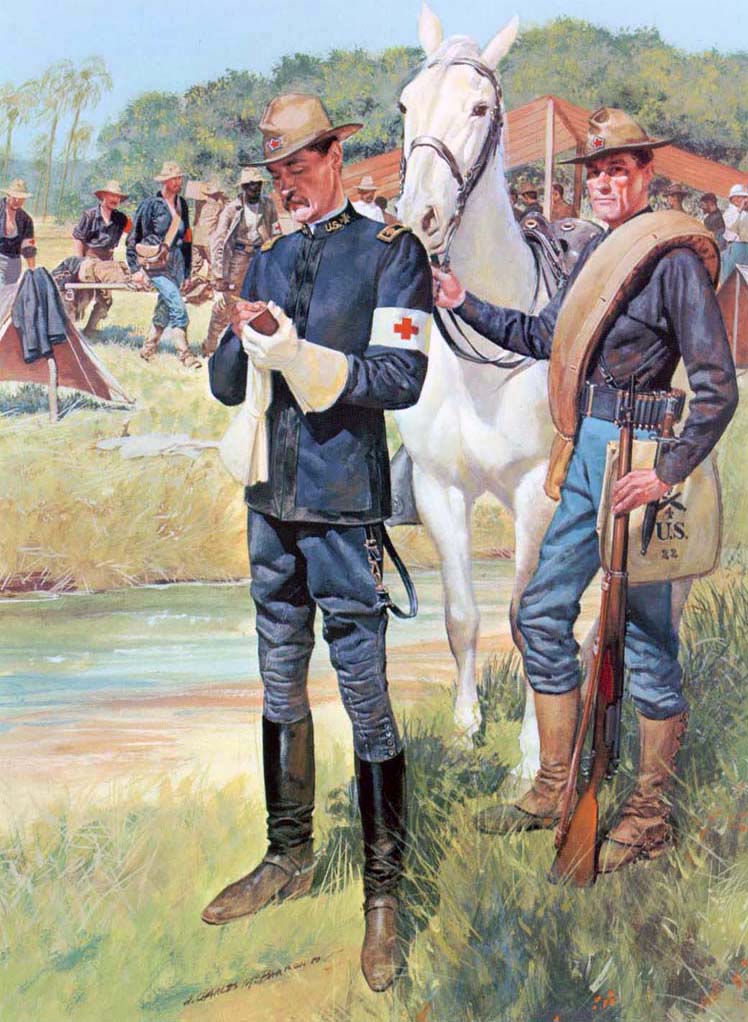 This field hospital in Cuba shows the last use of the blue Army field uniform in a major U.S. war. The trend toward neutral colors had led to the adoption of a khaki tropical service uniform in 1898, but few of the troops who reached Cuba were issued it. Instead of the new pattern tropical service uniform, most of the expeditionary force wore one or another version of the blue field uniform and the campaign hat adopted in the 1880's.

In the center foreground, a Medical Department major is wearing the dark blue officer's undress coat trimmed with black mohair braid introduced in 1895, dark blue breeches, black boots, and drab campaign hat. His branch is shown by the gilt modified Cross of St. John on his collar and the Red Cross brassard on his arm, while the gold embroidered oak leaves on his shoulder straps indicate his rank.

The field artillery private in the right foreground is wearing the enlisted man's uniform, which was typical for the Regular Army in Cuba, Puerto Rico, and the Philippines during the Spanish-American War. This was a dark blue wool shirt, light blue wool trousers, brown canvas leggings, and drab campaign hat. His blanket wrapped in a shelter half is slung over his shoulder and around his waist he wears a dark blue web loop cartridge belt from which hang his canvas haversack and the knife bayonet for his Krag rifle.

Both the Medical Department officer and the artillery private are wearing the enameled red, white, and blue five-bastion fort badge of Headquarters, Fifth Army Corps, on their hats. This was an extension of the concept of the unit identification system introduced during the Civil War and was the forerunner of the present day shoulder sleeve insignia.