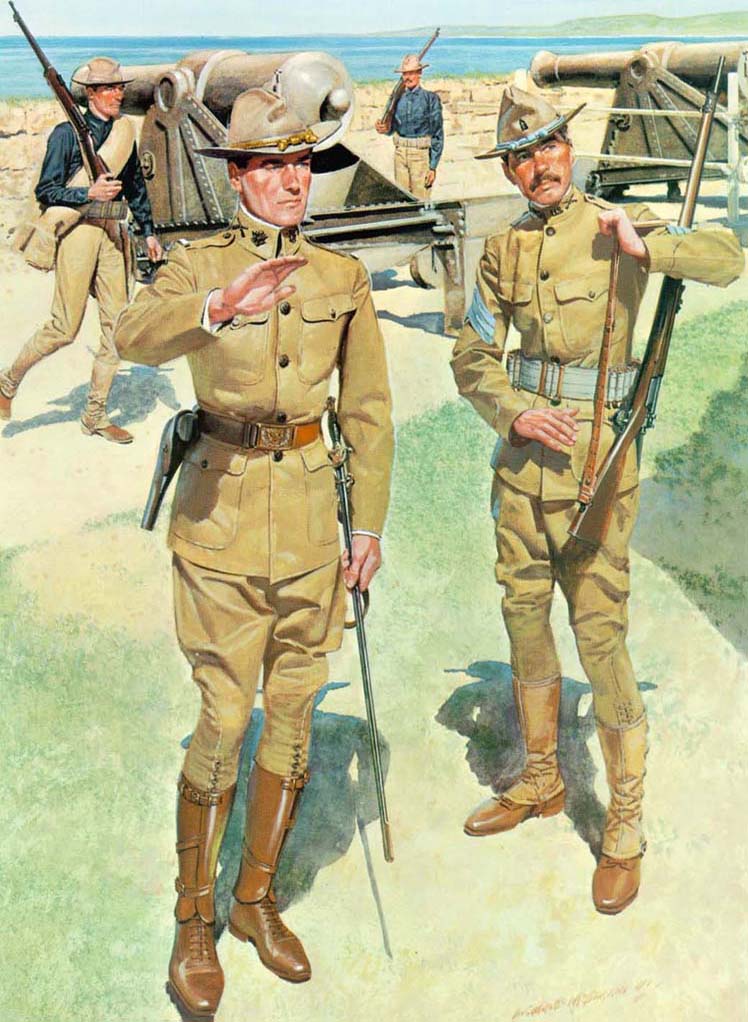 The United States entered the Spanish-American War still provincial in thought and policies; it emerged a world power with overseas possessions in the Caribbean and Pacific Ocean areas.

Representative of the reforms in dress since 1898 are these infantrymen in the Philippine Islands in 1903. Their uniform is the khaki tropical service dress with bronze buttons first adopted in 1898. Utility and suitability for field service were the keynote for this dress, simple in cut and with a minimum of ornamentation. The Grab campaign hat, distinctively American, became the official head covering and was the most liked by the soldier.

In the left foreground is a first lieutenant with the gold hat cord and bronze coat of arms of the United States on his standing collar, both worn by all officers of the Army. On his coat he wears the silver shoulder bar of his rank and on his collar bronze crossed rifles indicate his arm, the infantry. The lieutenant's breeches are laced from the calf nearly to the knee and are close fitting to go under his russet leather leggings. His waistbelt, of the same color of leather, supports his .38-caliber holstered service revolver and his sabre.

The sergeant in the right foreground is in the same uniform as the lieutenant. He has an infantry blue cord on his hat and infantry blue chevrons on the sleeves of his coat despite the adoption of white as the infantry color in late 1902. Troops in or returning from the Philippines were permitted to continue using items in the old infantry blue until they were worn out and stocks were exhausted. On the sergeant's hat can be seen the numeral and letter identifying his unit and on his collar the crossed rifles and the block letters U.S., all in bronze. In the place of the lieutenant's leather leggings he wears khaki, canvas ones, and his belt is the blue-grey looped cartridge belt used with the .30-caliber Krag rifle.

The privates in the background are wearing the most frequently seen version of the khaki uniform without the coat—dark navy blue wool shirt, which was a holdover from pretropical service days. The soldier on the left is ready for field service with his blanket roll, covered by the khaki shelter half, slung over his shoulder. The soldier on the right, a sentry, carries only his rifle and wears the cartridge belt.