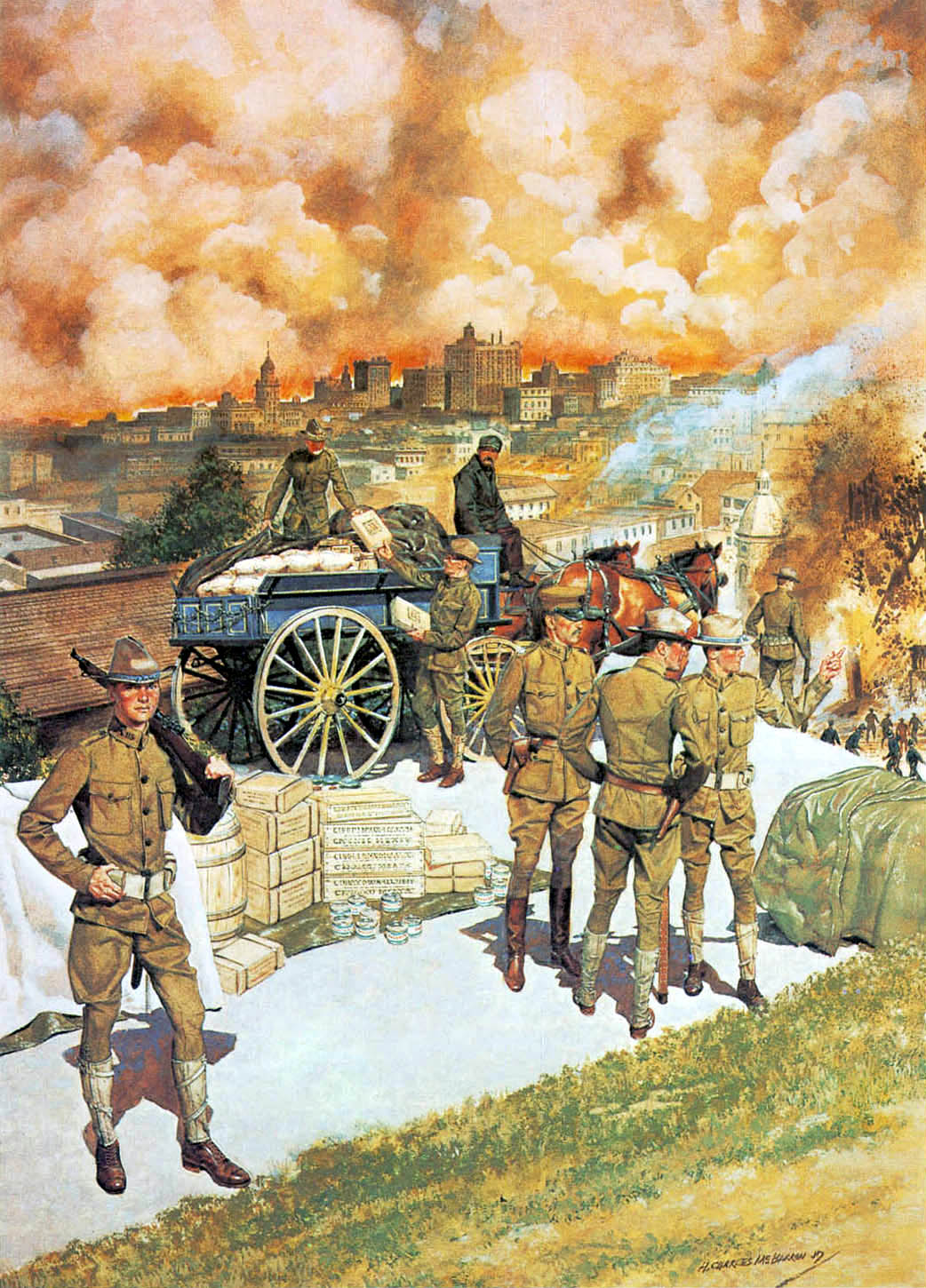 One of the greatest natural disasters in United States history, the San Francisco Earthquake, occurred on 18 April 1906 at about 5:15 a.m. The shift in the San Andreas fault toppled numerous chimneys, severely damaged others, and opened gaping cracks in the cobblestone streets. But the havoc wrought by the trembling earth was only the beginning. Almost immediately fires, fueled by debris and gas escaping from broken lines, sprang up in various sections of the city. Unfortunately, the quake also damaged water mains and to halt the spreading fires city officials decided to dynamite buildings to create fire lanes. The city fire chief sent an urgent request to the Presidio, an Army post on the edge of the stricken city, for dynamite. Brigadier General Frederick Funston, commanding the Department of California and a resident of San Francisco had already decided the situation required the use of troops. Collaring a policeman he sent word to the Mayor of his decision to assist. Martial law was never declared, however, and troops took guidance from civilian authorities.

During the first few days soldiers provided valuable services patrolling streets to discourage looting and guarding buildings such as the U.S. Mint, post office, and county jail. They aided the fire department in dynamiting to demolish buildings in the path of the fires. The Army also became responsible for feeding, sheltering, and clothing the tens of thousands of displaced residents of the city. This support prompted many citizens to exclaim, "Thank God for the soldiers!" Under the command of Maj. Gen. Adolphus Greely, Commanding Officer, Pacific Division, Funston's superior, over 4,000 troops saw service during the emergency. On 1 July 1906 civil authorities assumed responsibility for relief efforts and the Army withdrew from the city.

As fires rage through San Francisco soldiers, dressed in olive drab service dress with strapped leggings and wearing campaign hats with light blue cords designating infantry, unload one of many civilian wagons pressed into service with their drivers. (In addition to supplies from Army depots, food, including much flour, came from cities all over the United States.) The officer with the black visored service cap is a lieutenant colonel of infantry. With his olive drab, single breasted sack coat, with four chokedbellow pockets, low falling collar and dull finish bronze metal buttons he wears olive drab service breeches and russet leather boots. The officer and the artillery sergeant known by his scarlet hat cord carry .38 caliber service revolvers; the rifles shown are the new .30 caliber 1901 "Springfields."