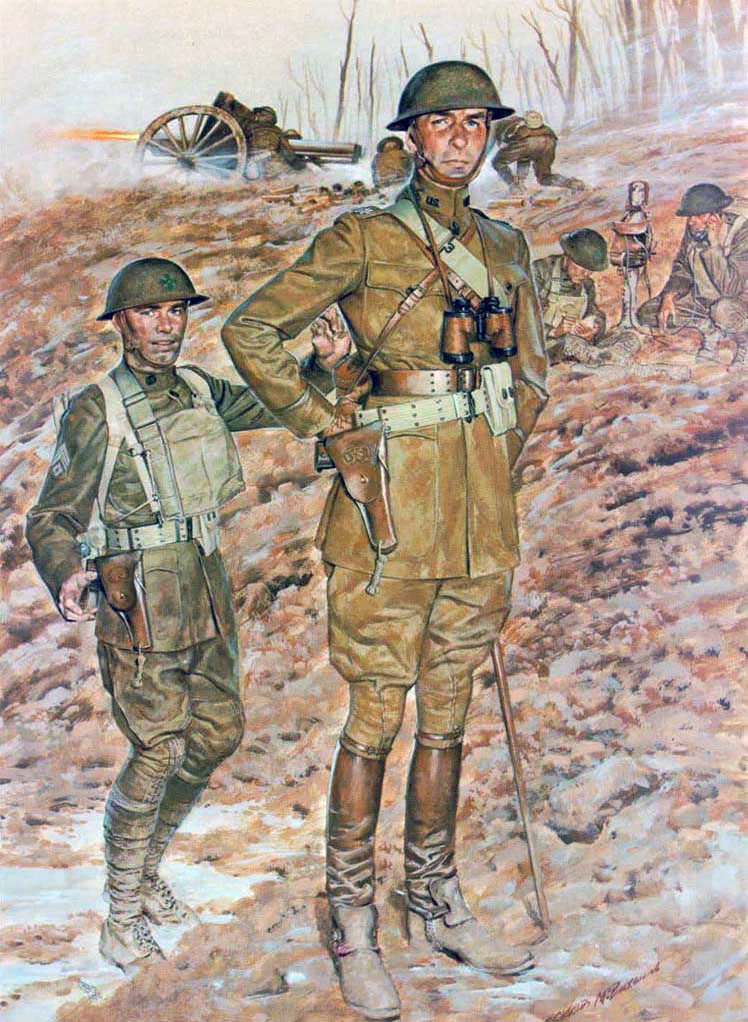 The standard field uniform of both officers and enlisted men of the American Expeditionary Forces—the AEF—in France was the wool olive drab uniform introduced into the Army during the first decade of the 20th century. The vast amounts of this material required in World War I led to the color being anything between mustard green and brown. Another item of equipment widely used in the AEF was the British "basin" pattern steel helmet painted a drab color.

In the front center is a lieutenant colonel of artillery with the silver leaf of his rank on his shoulder strap, and the bronzed crossed cannon of artillery and the block-style letters U.S. on the high standing collar. The color of his uniform and the distinctly British cut of his blouse are a sign that it was tailored in England or France—a common practice among the officers under General Pershing's command. Two other distinctive features of his officer's rank are the brown braid on his sleeve and his brown leather Sam Browne belt, adopted by the officers of the AEF from the British and retained in the post-World War I Army. He wears a drab web pistol belt with two magazines of ammunition for the .45-caliber automatic in its brown leather holster, while his drab canvas gas mask pouch, supported by a web belt, hangs over his right shoulder. The colonel also wears the high, brown boots prescribed for officers, a pattern much favored by the mounted men of that period.

The machine gun company first sergeant in the left foreground wears an issue olive drab uniform with the wrap-around "putters" adopted by the AEF during the war when production difficulties slowed procurement of the canvas leggings formerly worn. His grade is indicated by the three stripes and diamond on his sleeve, the chevrons now pointed toward his shoulder rather than toward his hand as in previous times. His branch of service is shown on the round, bronze collar device, and his unit is made known by the ivy leaf insignia of the AEF's 4th Division painted on his helmet. His drab canvas gas mask pouch is slung around his neck and his drab web cartridge belt is supported by suspenders of the same material.

In the background is a French 75-mm. field gun, part of the officer's command, with its artillery field telephone crew representative of the Army's artillery-machine gun-infantry close support team that ended the stalemate of the European battlefields of World War I.