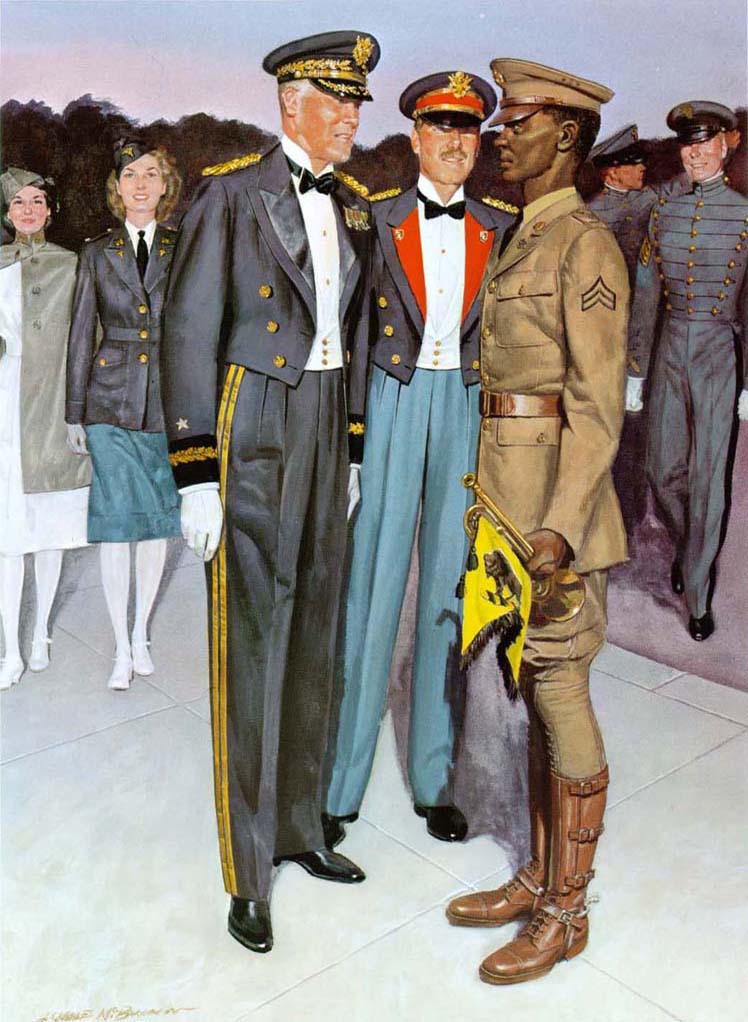 In the center foreground of this scene at the U.S. Military Academy are shown a brigadier general, his aide, a captain of field artillery, and a bugler of the 10th Cavalry. The general and his aide are in the dark blue mess jacket, three yellow buttons on each side, authorized in 1938. With the mess jacket they wear white vests and shirts, black silk bow ties, gold shoulder knots, blue dress caps, and black shoes. The general's mess jacket has dark blue silk lapels, blue-black velvet cuffs with a band of embroidered oak leaves on them, and a silver star to designate his rank on each sleeve. He has two stripes of gold lace down the seam of his dark blue trousers. His dress cap has gold oak leaves on the blueblack velvet band and on the visor, gold colored strap and buttons, and a gold colored coat of arms on the front. The aide's mess jacket and his cap band show the color of the artillery—scarlet—and on his lapels he wears the distinctive insignia of his regular regimental assignment, the 12th Field Artillery. His cap has a plain black visor and his trousers are light blue. The corporal bugler is a member of the squadron of the 10th Cavalry stationed at West Point. His uniform is the olive drab woolen service dress with the service cap of the same color. The corporal's coat has gilt buttons; he wears the gilt US., gilt branch insignia, and the black and yellow buffalo badge of his regiment on the lapels. His grade is indicated by two olive drab chevrons outlined in black on his sleeves. He has on russet leather waistbelt and buckle and laced boots of the same color. The trumpet is ornamented with a yellow and black tabard bearing the regimental badge.

In the left background are two Army nurses: one is in hospital dress of garrison cap and cape worn over the white nurses' uniform with brown buttons, and white stockings and oxfords; the other is in service dress of dark blue garrison cap, dark blue coat with gilt buttons and a stripe of light blue braid on the cuffs, medium blue skirt, and white shoes and stockings. Both wear the gilt caduceus with a superimposed "N." their branch insignia, and the gold block U.S., the mark of an officer.

In the right background are cadets of the Military Academy in their distinctive grey uniforms trimmed with black and yellow buttons, and gold lace insignia of cadet officers' rank.