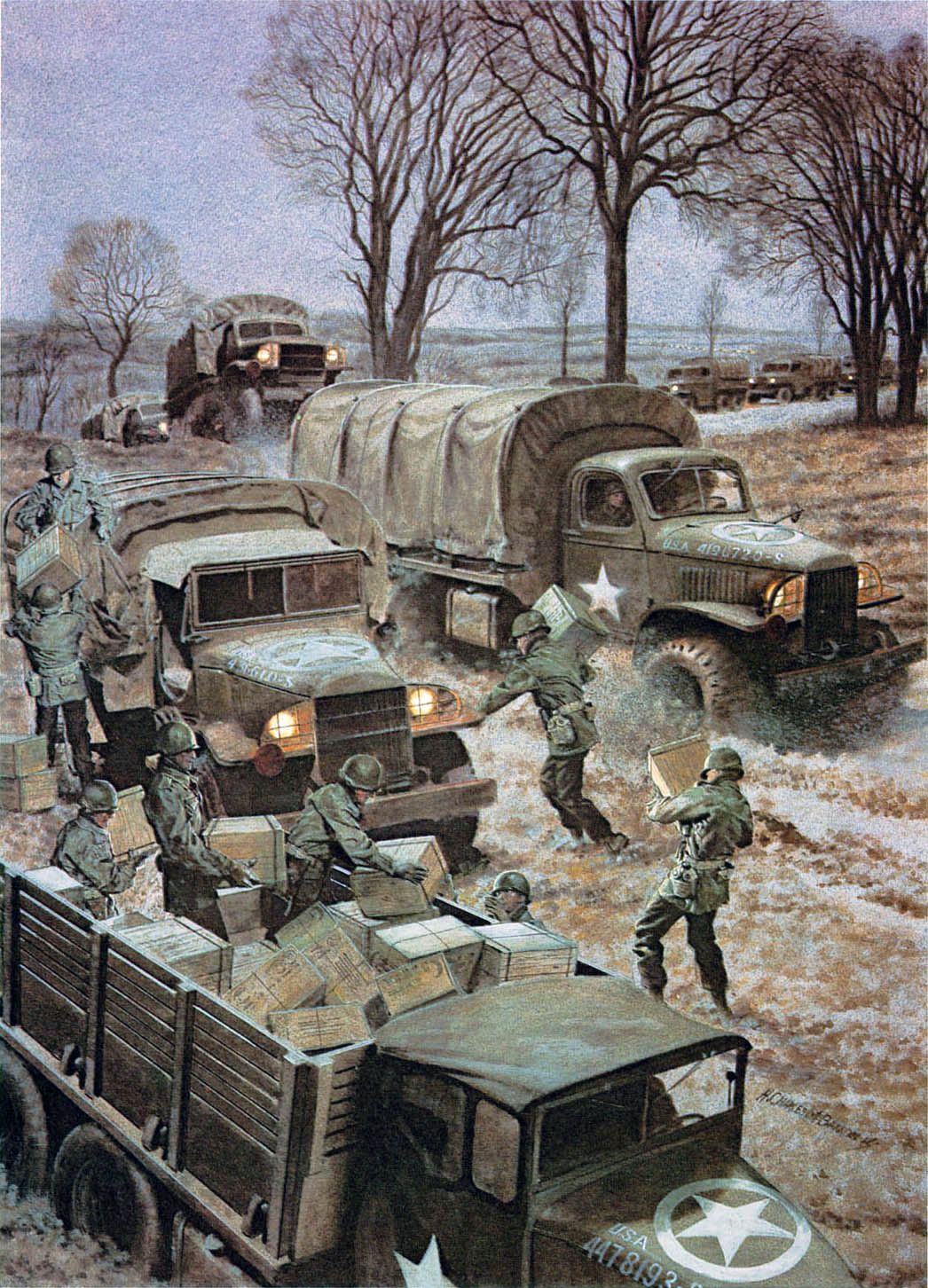 After the breakout from Normandy, the rapid advance severely strained the supply system. The crossing of the Seine further complicated matters and a critical stage was reached when an impending operation required stockpiling 100,000 tons of supplies. As only 25,000 tons could be moved from the beaches by rail, trucks would have to deliver the balance to points behind the front lines. The assignment fell to Advance Section, Communications Zone. The Motor Transport Services provided direction and coordination while the Motor Transport Brigade handled the actual movement of vehicles. The plans took into account the narrow roads of provincial France and called for a one way loop from St. Lo to supply dumps east of the Seine. Loaded trucks used a northern route and empty vehicles returned along southern roads. [Red balls on the trucks identified the vehicles and on sign posts, the roads} while military police on the route sported distinctive red balls on their helmets. Because of this unique identification the operation became known as the Red Ball Express.

Red Ball convoys began to roll on 25 August 1944. After four days tonnage reached a peak of 12,342 tons carried by 5,958 vehicles from 132 truck companies. In addition to regulating convoy movements, traffic control points at main intersections provided services for both drivers and vehicles. At midpoint on the route drivers were relieved by rested men. They waited and picked up the same truck on the return trip. With only two drivers, a truck was more likely to receive proper maintenance.

By 16 November the Red Ball Express had reached the end of its usefulness; the route stretched over 600 miles and men and vehicles had arrived at the limits of their endurance. Fortunately repairs to rail and waterways made it possible to continue the flow of supplies to the front. During its 81 days of operation the Red Ball Express handled 412, 193 tons. Expecting all Allied pause for resupply, the Germans were caught off guard. As a consequence many lives were saved and the conflict brought closer to a victorious conclusion.

Here in a soggy field somewhere outside Versailles, a driver has pulled his disabled truck out of a convoy. Determined nonrepairable by a Red Ball maintenance crew, its cargo is transferred to a replacement vehicle. When this is finished the driver will take a position in another convoy and eventually rejoin his unit at the exchange point in Normandy. The maintenance crew and driver are dressed in winter field uniform consisting of wool "OD" (olive drab) trousers and heavy twill field jackets. All are armed with 1911A1, .45 caliber, semiautomatic pistols.