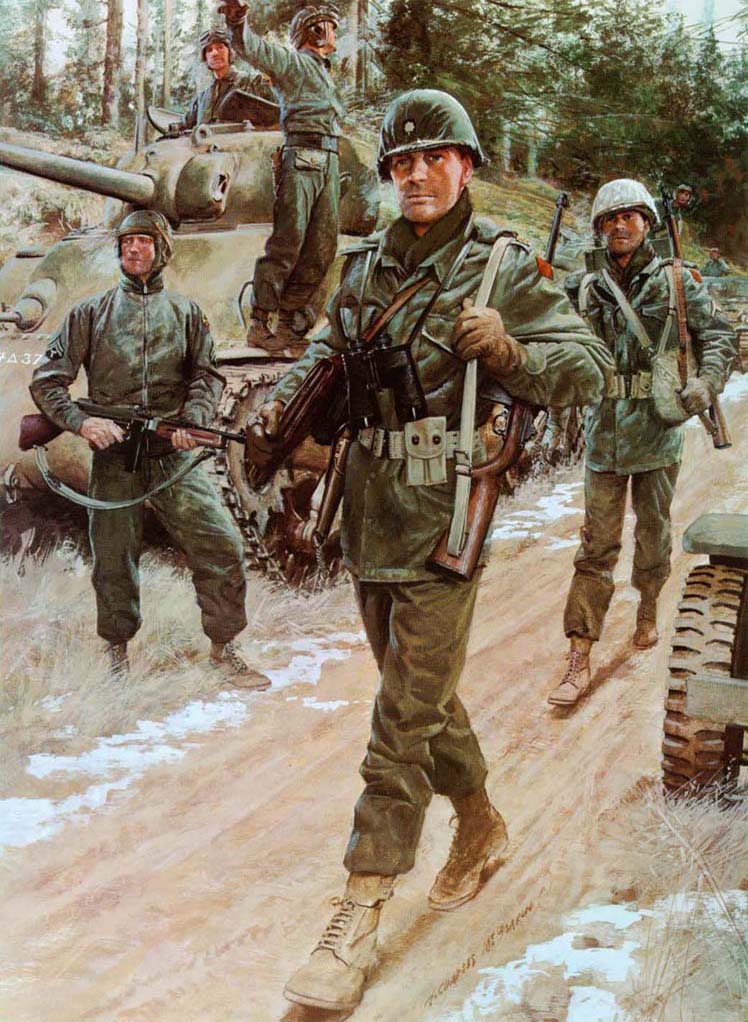 Men of the 5th Infantry and 4th Armored Division, who fought as teammates in Lt. Gen. George S. Patton, Jr.'s Third Army, show the combat uniform worn in the European theater in early 1945. The continued trend toward protective coloration and simplicity of style can be seen in these uniforms. All are olive green, varying only in the design of the individual pieces of apparel, which were adapted to the differing needs of the various branches of the service.

In the center foreground and right background are two infantrymen, a major and his radioman. They are wearing wool trousers, the latest style cotton cloth field jacket, wool scarves, and leather gloves, but they are still using the old natural leather field shoe with the buckle top added. The covers worn over their steel helmets show adaption for varying combat conditions —dark for field and forest activities and white for winter conditions. The major's rank is indicated by the gold oak leaves on his shoulder straps and the oak leaf painted on his helmet cover. The radioman's grade, private first class, is shown by the single chevrons on his sleeves. Both men wear the divisional shoulder sleeve insignia, the Red Diamond. The major is armed with a .30-caliber M1 carbine in addition to the .45-caliber automatic pistol prescribed for his rank and duty, while his radioman is armed with a .30-caliber M1 rifle, the basic infantry weapon of World War II. The radioman wears his drab canvas musette bag slung over his right shoulder, and the major carries his brown leather map case in his right hand.

In the left background is a Sherman medium tank with a 76-mm. gun and members of its crew. The tankers all wear the hard composition helmet prescribed for armored troops. The tank guard wears a field jacket of suiting lined with wool and with knitted cuffs, collar, and waistband over his tanker overalls and he also wears the new all laced combat boot. His

technician 5th grade classification is shown by the two olive green chevrons with a "T" underneath on a black background on each sleeve. On his right shoulder is the red, yellow, and blue triangular shoulder sleeve insignia, common to all armored divisions, with the numeral 4 in black on it denoting the 4th Armored Division. The tank guard is armed with a .45-caliber Thompson submachine gun, a vehicular weapon intended for use in just the fashion illustrated.