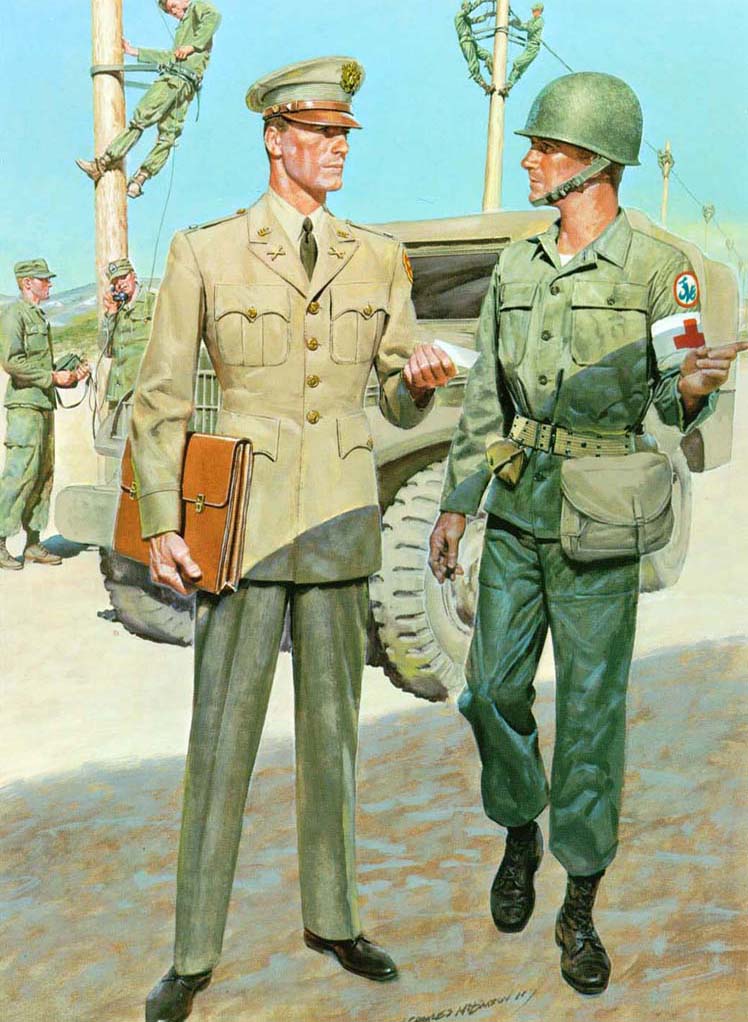 North Korean armed aggression against South Korea in June 1950 brought swift denunciation by the United Nations Organization. At the behest of the U.N. Security Council, the United States was asked to form a unified command for the various national contingents entering the conflict. The United States complied in late July, and President Truman appointed General MacArthur to lead the command. To supply the United States troops and their U.N. allies, Japan became one giant base dedicated to support of operations in Korea "the land of the morning calm." This scene at a logistical base in Japan shows the kinds of uniforms worn there.

In the left foreground is a first lieutenant of artillery from the 25th Infantry Division. He is wearing the light tan tropical worsted summer service uniform. His cap has a russet leather visor and band, gilt buttons, and the gilt United States coat of arms first adopted around the turn of the century. His roll collar, four-pocket coat has gilt buttons, a band of braid on the top of the cuff, and the letters U.S. on the roll collar. His rank is indicated by the silver bars on the shoulder straps and his branch of service by the crossed, gilt cannons on the lapels. On the left shoulder he has the red and yellow tropic lightning and tare leaf sleeve insignia of the 25th Infantry Division. Light tan trousers and russet leather shoes complete his uniform.

In the right foreground is a Medical Service private. He is an aidman assigned to a nonmedical unit to give immediate medical assistance. He is in the fatigue or field uniform of the period, in which grayish green and a faded tan are the predominant colors. He wears a steel helmet, a loose, open collar, grayish green cotton twill jacket with plain buttons, grayish green twill trousers, and brown leather laced boots. He carries an individual medical packet and a medical supply haversack on his drab web cartridge belt. Around his right arm he has the Geneva Convention red cross armband and on his right jacket sleeve the shoulder insignia of the Japan Logistical Command, one of the major support elements for the Korean operations.

In the background, Signal Corps linesmen are at work in fatigue uniforms and the loose, floppy fatigue cap. The sergeant is wearing a sleeve chevron on the front of his cap to designate his grade, strictly nonregulation, but practical.