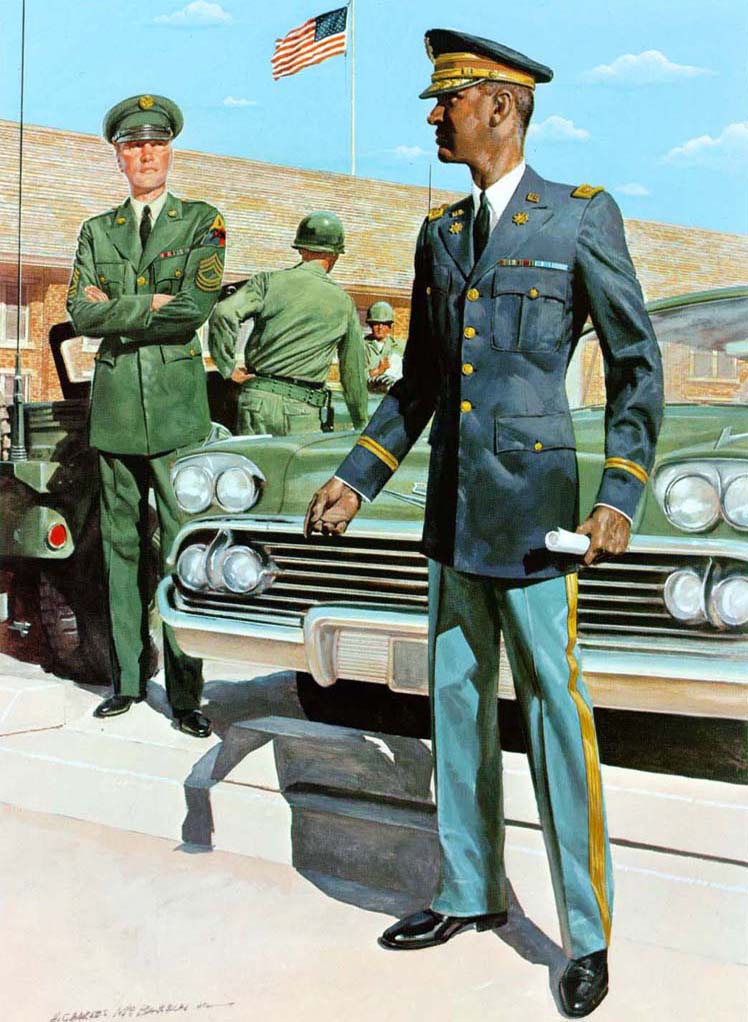 The armistice in Korea in July 1953 brought no real peace to a troubled world. With the conviction that both limited and nuclear war were possible, the Army's leaders undertook the challenging task of revamping the Army's structure and doctrine to enable it to fulfill its mission in the atomic age. Within the limits of the resources allotted to it, the Army in the years following Korea developed new concepts, new weapons, and new tactical formations.

The dress of the soldier also underwent experimental change during this time, but each successive revision seemed to fall short of what was desired. New dress uniforms, carrying on the Army's traditional blue, were adopted in the early 1950's and a new green service uniform came into use at the end of that decade. These two uniforms, the blue dress and the green service are shown here.

In the left foreground is a master sergeant of the 1st Armored Division in the green service uniform. His single-breasted coat has a roll collar and gilt buttons. On his collar he wears the round gilt branch insignia, on both sleeves the golden yellow chevrons of his grade, and on his left arm the 1st Armored Division shoulder sleeve insignia. The sergeant's green service cap has a round gilt national coat of arms in the front and gilt buttons on the black leather strap. This color of leather—black—also seen in the cap visor and the sergeant's shoes, is a change from the russet leather worn in the Army from the Spanish-American War to this time.

In the right foreground stands a major of the Transportation Corps in the Army blue dress uniform. His dark blue, single-breasted coat has gilt buttons and the letters U.S. in gilt on the collar. His branch is indicated by the gilt insignia of a ship's steering wheel and a winged car wheel on a rail on his lapels, as well as by the brick red branch color shown on the stripe of the sleeve of his coat, on the cap band, and on the background of his shoulder straps, all of which are bordered with gold. His rank is shown by the gold oak leaves on his shoulder straps and the gold embroidery on the black visor of his dark blue cap. He wears the light blue trousers with a gold lace stripe down the side worn by officers. On the front of his cap is the gold colored coat of arms of the United States; the strap and buttons are also gold.

In the background are enlisted men in green fatigue uniforms.