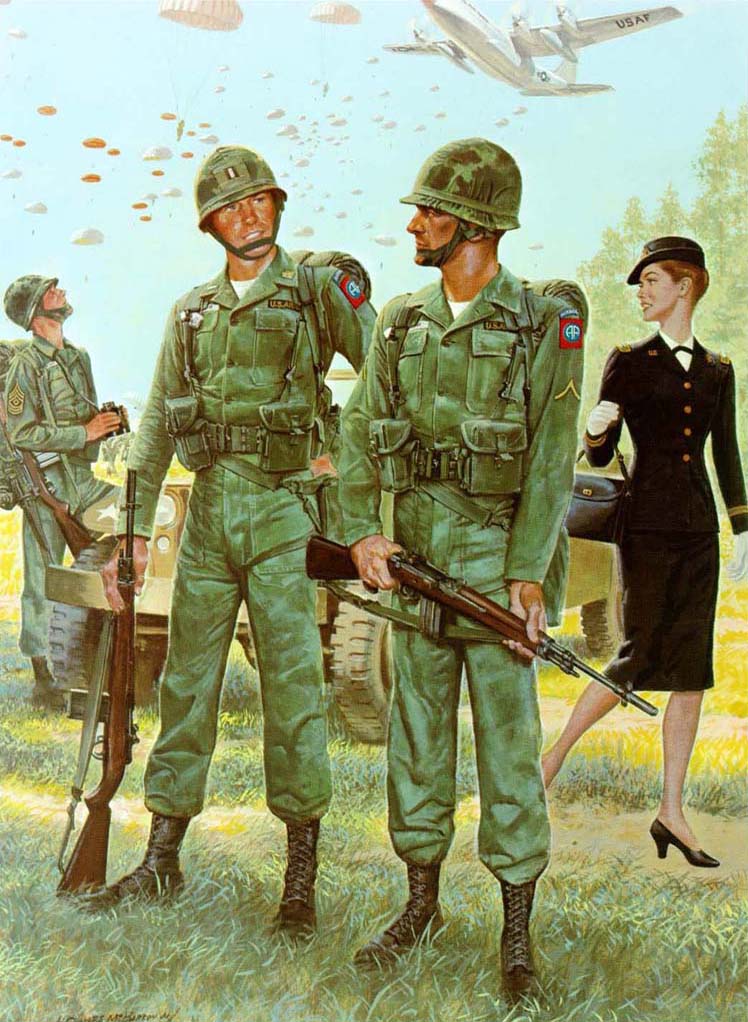 Among the new types of troops added to the Army's order of battle as a result of World War II experience, none was to assume a more important role than the airborne soldier. Chosen as the core around which the United States would construct the ready response forces during the Cold War period, an ever-increasing number of soldiers were "airborne qualified," and airborne units were maintained in a higher state of readiness than most other forces.

In the background are a U.S. Air Force C-135 transport aircraft and open parachutes. The presence of only two colors of parachutes serves to point up a change from World War II practices. Whereas in World War II a variety of parachute colors were used to identify personnel and the various major classes of supplies being furnished, the 1963 practice called for the colors to be used to identify the various organizations employed in a given operation.

In the right and left foreground are a first lieutenant and a private, first class, and in the left background is a first sergeant, all of the 82d Airborne Division on maneuvers about 1963. They are dressed in the olive green field uniforms introduced during the 1950's and are carrying the M14 rifle. Note the compactness of their dark green equipment, the large ammunition pouches made necessary by the high rate of fire of the M14, the location of various items—especially the gas mask—and the arrangement of the torso and thigh web straps so as to most efficiently secure the variety of personal equipment they must carry. Three features mark the men as airborne soldiers: the paratroopers boots, the special chinstrap harness worn with the helmet, and the red, white, and blue "AA" insignia—worn by the 82d Division in World War I—with the "airborne" tab, added during World War II. The sergeant's gold chevrons show the form of the insignia for this grade in 1963.

In the right background is a Women's Army Corps (WAC) officer passing by in her Army blue dress uniform trimmed in gold. The green background on her shoulder straps and the green stripe on her sleeve indicate her branch.

This painting illustrates the modern concept of uniforms—a simple, functional field uniform of subdued color and a dress uniform attractive in style and color.