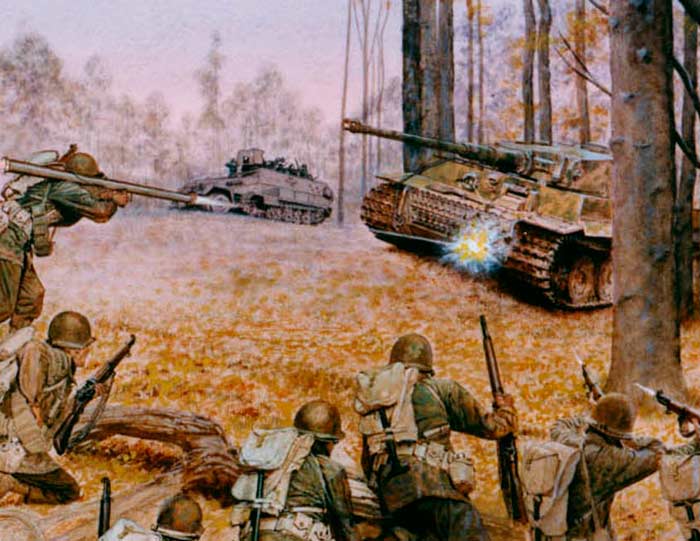 FRANCE, OCTOBER 1944. The rain and chill which precedes winter in the Vosges mountains had started. The 442d Regimental Combat Team was weary and battle-scarred after fighting in Italy. Most of its members were Americans of Japanese ancestry. Men with names like Sumida, Miyamoto, Takemoto and Tanaka would write a bright page in the history of the U.S. Army.

On 27 October, the 442d was called on to rescue a surrounded U.S. battalion. They attacked the heavily fortified defenses of a superior German force. Fighting was desperate, often hand-to-hand. By 30 October, nearly half the regiment had become casualties.

Then, something happened in the 442d. By ones and twos, almost spontaneously and without orders, the men got to their feet and, with a kind of universal anger, moved toward the enemy positions. Bitter hand-to-hand combat ensued as the Americans fought from one fortified position to the next. Finally, the enemy broke in disorder.

"Go For Broke" was more than a motto for the 442d Regimental Combat Team. At a special ceremony to honor the 442d, seeing only a few hundred men, the Divison Commander asked why the whole regiment was not present. Colonel Charles W. Pence is said to have replied. "Sir ... this is the entire regiment."