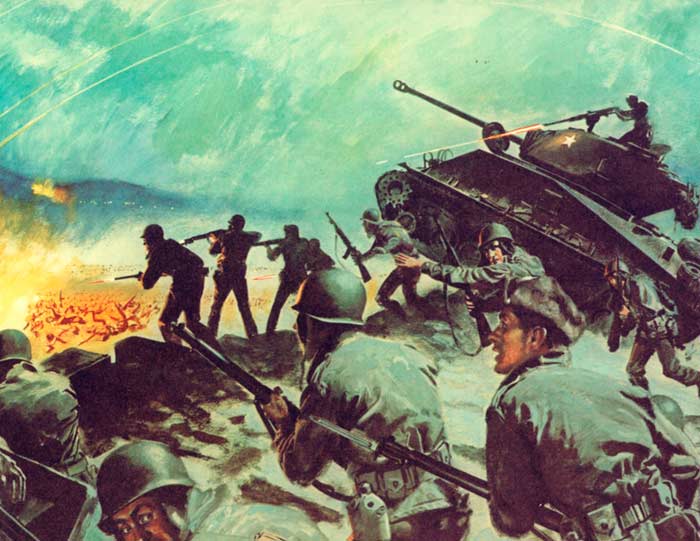 In February of 1951, the 23d Infantry Combat Team of the 2d Infantry Division, with attached French and Dutch units, while moving forward to attack in advance of the Eighth Army, was cut off and surrounded by overwhelming forces of Chinese Reds in the narrow Korean valley of Chipyong-ni. The Reds occupied the commanding ridges, while the American commander, Colonel Paul Freeman, isolated far in advance of the general battle line, used a ring of lower hills within the valley itself for his defensive perimeter. For more than three days in near freezing weather the defenders held these positions. The action pictured is on the fourth day when an American armored unit broke through from the south. At this time the valiant 23d Infantry Combat Team smashed out of the perimeter at the lower end of the valley to break the encirclement, and with its units and most of its equipment intact, rejoined the Eighth Army.

General Matthew B. Ridgway in his official report to a Joint Session of Congress said of this action: "These American fighting men with their French comrades in arms measured up in every way to the battle conduct of the finest troops America or France has produced throughout their national existence."