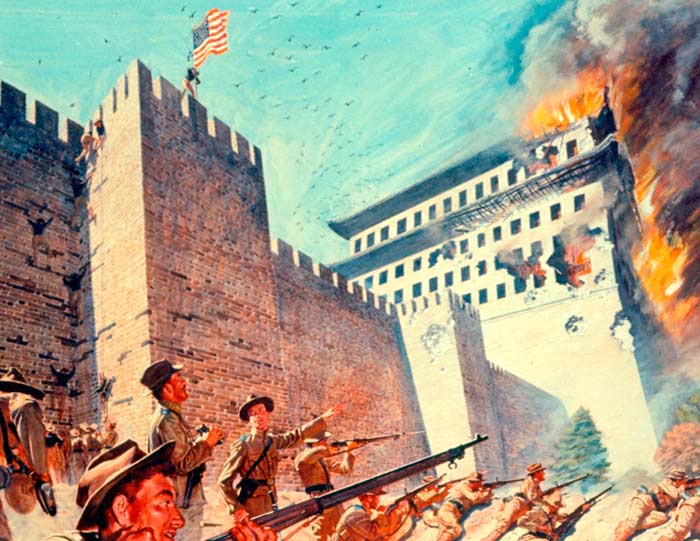 During the fiercely opposed relief expedition to Peking in the Boxer Rebellion in 1900, when two companies of the U.S. Army's 14th Infantry Regiment were pinned by heavy fire from the east wall of the Tartar City and the Fox Tower between abutments of the Chinese City Wall near Tung Pien Gate, volunteers were called for to attempt the first perilous ascent of the wall. Trumpeter Calvin P. Titus of E Company immediately stepped forward saying, "I'll try, sir!" Using jagged holes in the stone wall, he succeeded in reaching the top. He was followed by the rest of his company, who climbed unarmed, and hauled up their rifles and ammunition belts by a rope made of rifle slings. As the troops ascended the wall artillery fire from Reilly's battery set fire to the Fox Tower. In the face of continued heavy Chinese fire, the colors broke out in the August breeze as the sign that U.S. Army troops had achieved a major step in the relief of the besieged Legations. For his courageous and daring deed in being the first to climb the wall, Trumpeter Titus was awarded the Congressional Medal of Honor.