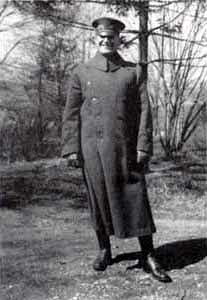 Harvey Thomas Dunn's first sketches were on the blackboards of the one-room school he attended in his birthplace of Manchester, South Dakota. He entered the South Dakota Agriculture College in 1901 where an art instructor, Ada Berthan Caldwell, encouraged him to pursue his talents at the Art Institute of Chicago. In 1904 he left Chicago to study with Howard Pyle in Wilmington, Delaware. While studying in Delaware he met future AEF artists William J. Aylward and Ernest C. Peixotto and developed a lifelong desire to teach. During his career as a teacher and illustrator Dunn worked for a number of weekly and monthly periodicals and books, but his longest-lasting professional relationship (1906-1939) was with the Saturday Evening Post. While there he provided illustrations for writers such as Kathleen Morris and Rudyard Kipling.

During the war Dunn was one of the artists who periodically accompanied troops as they moved out of the trenches to go over the top into combat. He designed a special apparatus for working in the trenches; its rollers enabled him to wind finished sketches into a box and to unwind clean paper as needed. Carrying this contraption, he followed the fighting units across their battlefields, capturing his images of war as he traveled. His work reflects the time he spent with frontline units, capturing his impressions of the American soldier at war.

Following the war, Dunn resumed his teaching career and became the best known of the war's official artists. In addition to operating his own school in Leonia, New Jersey, he taught at the Grand Central School of Art in New York City.