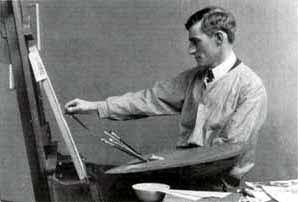 George Matthews Harding was born in Philadelphia, where his choice of careers was influenced by his older sister Charlotte. (She had studied art at the Pennsylvania School of Design for Women at the Pennsylvania Academy of Fine Arts and with Howard Pyle.) After Harding spent a brief period studying architecture at Boston Tech, his sister encouraged him to attend the Pennsylvania Academy of Fine Arts. He attended the academy at night and worked as an architect during the day. Following an introduction by his sister, Harding, like other future AEF artists, studied for a time with Howard Pyle.

Harding's first illustrations appeared in the Saturday Evening Post in 1903, and in 1906 he became an illustrator and author for Harper's Monthly Magazine. While with Harper's he traveled extensively throughout the United States and the world. In 1915 he joined the faculty of the University of Pennsylvania as an associate professor in the department of fine arts, a post he held until 1935.

He began his World War I service as a member of the poster committee of the U.S. Navy Recruiting Service, and from there he was selected for the Army's program. Much of the work he produced during the war reflects his attempts to satisfy critics in Washington who wanted to see more action scenes. After the war Harding returned to his painting and teaching in Philadelphia, publishing a limited-edition portfolio of some of his war art entitled The American Expeditionary Forces in Action. In World War II he once again became a war artist, this time as a captain in the U.S. Marine Corps.