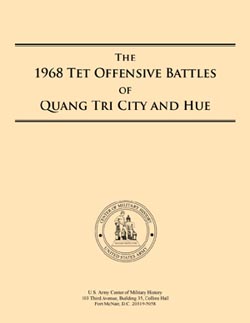 The 1968 Tet Offensive Battles of Quang Tri City and Hue

U.S. Army Counterinsurgency and Contingency Operations Doctrine, 1942-1976, is the second installment in the two-volume study on the U.S. Army's experience in "small war" situations and the development of low-intensity conflict doctrine. As the U.S. government wrestles with tough questions on how to bring peace and stability to countries torn by internal strife, Andrew J. Birtle provides context for these concerns by describing how the United States attempted to suppress insurgencies and build nations during the Cold War. Employing a range of primary and secondary sources, Birtle explains how the Army in the 1950s and 1960s developed a dual strategy that combined military measures with political and socioeconomic reforms. On the military side, he states, doctrine advocated aggressive offensive operations, elaborate intelligence networks, and extensive security measures to drive the guerrillas away from inhabited areas and to secure the population from rebel influence and intimidation. On the civil side, Birtle continues, doctrine called for the implementation of measures to restore the norms of social and economic life; to establish efficient and popular government; and to redress, when possible, the causes of unrest. Birtle uses case studies of counterinsurgency wars in Greece, Korea, the Philippines, Latin America, and Vietnam to explore the strengths and weaknesses of the nation's approach to counterinsurgency. Although the United States' counterinsurgency record was mixed, Birtle shows that the precepts underpinning U.S. doctrine have remained surprisingly constant over the years. By furnishing an in-depth look at how the Army performed its counterinsurgency and nation-building responsibilities during a previous era of global instability, Birtle sheds some needed light on the work that must be done today and tomorrow.

The Role of Federal Military Forces in Domestic Disorders, 1945-1992, the third of three volumes on the history of Army domestic support operations, continues the story of institutional and other changes that took place in the Army during the post–World War II years. Paul J. Scheips adeptly relies on official records and other contextual supporting materials to chronicle the U.S. Army's response to major social events in contemporary American society—the civil rights movement, including the integration of Central High School in Little Rock, Arkansas, and the University of Mississippi; the racial disturbances of the 1960s, especially the civil unrest in Chicago, Baltimore, and Washington, D.C., following Martin Luther King's assassination; the protest marches during the Vietnam conflict; and the controversies surrounding the Army's role at Wounded Knee and the race riot in Los Angeles in 1992. Despite occasional lapses, the Army has carried out its civil disturbance duties with moderation and restraint—a testament to the common sense, flexibility, and initiative of highly disciplined soldiers at all levels of command. These hallmarks of a trained and ready force are invaluable not only during domestic civil support but also during the full range of military operations so prevalent in today's uncertain times.