General of the Army Douglas MacArthur

"Today the guns are silent. A great tragedy has ended. A great victory has been won."
General of the Army Douglas MacArthur on the USS Missouri in Tokyo Bay, 2 September 1945

“On land and sea and in the air, American men and women have given their lives so that this day of ultimate victory might come and assure the survival of a civilized world.”
President Harry S. Truman, V-J Day Message, 1 September 1945

On 2 September 1945, the Empire of Japan formally surrendered to the Allies, or "United Nations," in a ceremony conducted aboard the battleship USS MISOSOURI in Tokyo Harbor. Although the Japanese government notified the Allies of its acceptance of the Potsdam Declaration Defining Terms for Japanese Surrender Accord on 15 August, the instrument of surrender documents were not signed until this date. The proceeding brought an official end to World War II.

Designated as the Supreme Commander for the Allied Powers in the Pacific (SCAP) for the occupation of Japan, General of the Army Douglas MacArthur signed the "instrument of surrender," on behalf of the United Nations, and declared, "It is my earnest hope and indeed the hope of all mankind that from this solemn occasion a better world shall emerge out of the blood and carnage of the past.” Ten more signatures were made, by representatives of the United States, China, Britain, the Soviet Union, Australia, Canada, France, the Netherlands, and New Zealand, respectively. U.S. Navy Fleet Admiral Chester W. Nimitz signed for the United States. When the 20-minute-long ceremony ended, the last true world war, and most devastating armed conflict in history, was officially declared over.

General of the Army Douglas MacArthur signs the surrender document on behalf of the Allies, or United nations, NARA

General of the Army Douglas MacArthur signs the surrender document on behalf of the Allies, or United nations, NARA 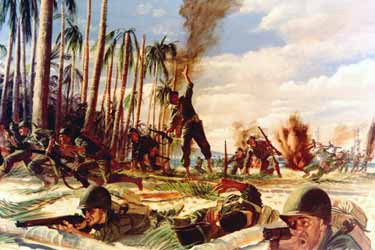