The Badge of Military Merit / The Purple Heart 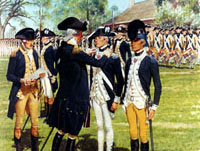 At his headquarters in Newburgh, New York, on August 7, 1782, General George Washington devised two new badges of distinction for enlisted men and noncommissioned officers. To signify loyal military service, he ordered a chevron to be worn on the left sleeve of the uniform coat for the rank and file who had completed three years of duty "with bravery, fidelity, and good conduct"; two chevrons signified six years of service. The second badge, for "any singularly meritorious Action," was the "Figure of a Heart in Purple Cloth or Silk edged with narrow Lace or Binding." This device, the Badge of Military Merit, was affixed to the uniform coat above the left breast and permitted its wearer to pass guards and sentinels without challenge and to have his name and regiment inscribed in a Book of Merit. The Badge specifically honored the lower ranks, where decorations were unknown in contemporary European Armies. As Washington intended, the road to glory in a patriot army is thus open to all."

Three badges were awarded in the waning days of the Revolutionary War, all to volunteers from Connecticut. On May 3, 1783, Sergeant Elijah Churchill and William Brown received badges and certificates from Washington's hand at the Newburgh headquarters. Sergeant Daniel Bissell, Jr., received the award on June 10, 1783.

Churchill was a 32-year old carpenter from Enfield who entered the 8th Connecticut as a private on July 7, 1775. On May 7, 1777, he re-enlisted for the duration of the war as a corporal in the 2d Continental Light Dragoon Regiment, later the 2d Legionary Corps, and was promoted to sergeant on October 2, 1780. He was cited for gallantry in action at Fort St. George near Brookhaven on Long Island, at Coram, New York, in November 1780, and at Tarrytown, New York, in July 1781.

A native of Stamford, Brown enlisted in the 5th Connecticut Regiment as a corporal on May 23, 1775, and re-enlisted as a private on April 9, 1777, for the duration in the 8th Connecticut. He was promoted to corporal on May 8, 1779, and to sergeant on August 1, 1780, transferring with the consolidation of units to the 5th Connecticut on January 1, 1781, and to the 2d Connecticut on January 1, 1783. No record of his citation has been uncovered, but it is believed that he participated in the assault on Redoubt No. 10 during the siege of Yorktown.

Bissell, from East Windsor, enlisted on July 7, 1775, as a fifer in the 8th Connecticut Regiment, and on April 1, 1775, signed on for the duration as a corporal in the 5th Connecticut. He became a sergeant on September 1, 1777, and ended the war with the 2d Connecticut. Under Washington's direct orders he posed as a deserter in the city of New York from August 14, 1781, to September 29, 1782, relaying valuable information to the Continental command.

The award fell into disuse following the Revolution and was not proposed again officially until after World War I. On October 10, 1927, Army Chief of Staff General Charles P. Summerall directed that a draft bill be sent to Congress "to revive the Badge of Military Merit."

For reasons unclear, the bill was withdrawn and action on the case ceased on January 3, 1928, but the Office of The Adjutant General was instructed to file all materials collected for possible future use.

The rough sketch accompanying this proposal showed a circular disc medal with a concave center in which a relief heart appeared. The reverse carried the legend: For Military Merit.

A number of private interests sought to have the medal reinstituted in the Army. One of these was the board of directors of the For Ticonderoga Museum in New York.

On January 7, 1931, Summerall's successor, General Douglas MacArthur, confidentially reopened work on a new design, involved the Washington Commission of Fine Arts. His object was medal issued on the bicentennial of George Washington's birth.

Miss Elizabeth Will, an Army heraldic specialist in the Office of the Quartermaster General, was named to redesign the newly revive medal, which became known as the Purple Heart. Using general specifications provided to her, Ms. Will created the design sketch for the present medal of the Purple Heart. Her obituary , in the February 8, 1975 edition of The Washington Post newspaper, reflects her many contributions to military heraldry.

The Commission of Fine Arts solicited plaster models from three leading sculptors for the medal, selecting that of John R. Sinnock of the Philadelphia Mint in May 1931.

As described in Army Regulations 600-35 of November 10, 1941, the design consisted of a purple enameled heart within a bronze quarter-inch border showing a relief profile of George Washington in Continental uniform. Surmounting the enameled shield is Washington's family coat of arms, the same used by the heart shape and the coat of arms of the obverse is repeated without enamel; within the heart lies the inscription, For Military Merit, with space beneath for the engraved name of the recipient. The device is 1-11/16 inches in length and 1-3/8 inches in width, and is suspended by a rounded rectangular length displaying a vertical purple band with quarter-inch white borders.

The War Department announced the new award in General Order No. 3, February 22, 1932:

By order of the President of the United States, the Purple Heart established by General George Washington at Newburgh, August 7, 1782, during the War of the Revolution, is hereby revived out of respect to his memory and military achievements.

By Order of the Secretary War:

The association of the Purple Heart with wounds or fatality suffered in the line of meritorious service also stems from this time. Eligibility for the new award was defined to include:

•Those in possession of a Meritorious Service Citation Certificate issued by the Commander-in Chief of the American Expeditionary Forces in World War I. The Certificates had to be exchanged for the Purple Heat or the award and Oak Leaf Clusters as appropriate. This preserved the ideal of presenting the award for military merit and loyal service.

•Those authorized by Army Regulations 600-95 to wear wound chevrons. These men also had to apply for the new award.

•Those not authorized wound chevrons prior to February 22, 1931, but who would otherwise be authorized them under stipulations of Army Regulations 600-95.

Revisions to AR 600-45 at the time, defining conditions of the award, elaborated upon the "singularly meritorious act of extraordinary fidelity service" required. "A wound which necessitates treatment by a medical officer and which is received in action with an enemy may, in the judgment of the commander authorized to make the award, be construed as resulting from a singularly meritorious act of essential service." War Department Circular No 6 dated February 22, 1931, carried the same instructions.

The Navy Department at this time saw no reason to authorize the Purple Heart for its officers and men. The Department maintained that the award was "purely an army decoration."

No record survives today of the identity of the first individual to revive the revived and redesigned Purple Heart. Local posts of the American Legion held ceremonies to honor recipients, and it was also common to invite the Adjutant General of state National Guards to preside over the ceremonies and present awards, but the practice was nowhere standard.

Developments concerning the Purple Heart after 1931 served to define further eligibility requirements for the award and to identify it even more closely with bloodshed or loss of life in the nation's service.

In Executive Order 9277 of December 3, 1942, President Franklin D. Roosevelt extended the use of the award to the Navy, the Marine Corps, and the Coast Guard after December 6, 1941, and established a uniform application of standards for the award in the Army and the Navy.

President Harry S. Truman, in Executive Order 10409 of November 12, 1952, retroactively extended Navy, Marine Corps, and Coast Guard eligibility for the Purple Heart back to April 5, 1917, to cover World War I.

President John F. Kennedy issued Executive Order 11016 on April 25, 1962, extending eligibility as well to "any civilian national o the United States, who while serving under competent authority in any capacity with an armed force, has been, or may hereafter be, wounded."

Current eligibility and conditions for the award are defined in Army Regulations 600-8-22. Paragraph 2-8e, added June 20, 1969, carries the notice that "any member of the Army who was awarded the Purple Heart for meritorious achievement or service, as opposed to wounds received in action, between 7 December 1941 and 22 September 1943, may apply for award of an appropriate decoration instead of the Purple Heart."

The Purple Heart is ranked immediately behind the bronze star in order of precedence among the personal awards; however, it is generally acknowledged to be among the most aesthetically pleasing of American awards and decorations.