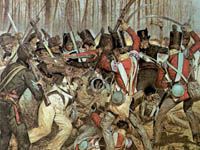 While peace negotiations to end the War of 1812 were taking place at Ghent in late 1814, the British decided to continue an operation that had been planned earlier. This was to be a raid upon the Gulf Coast to capture New Orleans and possibly separate Louisiana from the United States. The Americans, having received early word of the British intentions, placed their southern defenses under the command of Major General Andrew Jackson. Jackson arrived at New Orleans on 2 December and began making preparations to meet the British expedition.

The British force, under Major General Keane, made good progress. Arriving at the mouth of Lake Borgne on 10 December, they met and captured the American gunboat flotilla on that lake four days later. After that they conducted an undetected reconnaissance to within six miles of New Orleans.

News of the gunboat's capture caused consternation. Jackson placed the city under martial law and concentrated his scattered troop detachments nearby. General Coffee with his mounted riflemen arrived on 19 December, and Tennessee and Mississippi volunteers, unde General Carroll, arrived a few days later. In and around the city itself Jackson had two regular regiments, the 7th and 44th; a thousand state militia; a battalion of three hundred city volunteers; a rifle company of about sixty; a battalion of free blacks, mostly refugees from Santo Domingo; and twenty-eight Choctaw Indians. It was fortunate that Jackson's men had concentrated quickly, for at noon on 23 December the British advance force, a light brigade of about nineteen hundred men under Lieutenant Colonel Thornton, appeared on the banks of the Mississippi at the Villere plantation about nine miles from New Orleans, where they were to camp for the night. Jackson was told of the British arrival and decided to attack that evening. The main body of about thirteen hundred led by him would make a frontal attack, and Coffee with approximately seven hundred would hit from the flank while the arme schooner Carolina in the river would sweep the British with its guns. The action began well. The Carolina commenced her bombardment at 7:00 pm and soon after, Jackson and Coffee engaged the surprised British. But the early winter night had fallen and with night came fog. Men became separated from their units and soon the action became a melee with squads and individuals meeting, often fighting hand-to-hand with little overall control. At first the Americans were successful, but the British steadied with the arriva of reinforcements. After about an hour and a half of this confusion. Jackson broke off the action and withdrew his troops. He was followed by Coffee an hour later. The Americans lost 213 killed and wounded. British casualties totaled 267.

The painting shows the Choctaws and a mixed group of Major Daquin's Battalion of Free Men of Colour. The latter were mostly attired in civilian clothes because they had been organized only for a few weeks. They are led by an officer distinguishable by his sword and red sash. Facing them are members of the British 85th Regiment in red coats with yellow facings and white lace, and members of the British 95th Regiment in green uniforms with black facings and white lace.

Meuse-Argonne, September 26-October 1, 1918. The 369th Infantry fought valiantly in the Allied (Champagne) Offensive as part of the French 161st Division. Attacking behind a fiery barrage, the 369th Infantry assaulted successive German trenchlines and captured th town of Ripont. Against determined resistance, the 369th advanced up the heights norths of the Dormoise River and spearheaded the attack toward the town of Sechault. On 29 September, the Regiment ". . . stormed powerful enemy positions, . . . took, after heavy fighting, the town of Sechault; captured prisoners and brought back six cannons and a great number of machine guns." Despite heavy casualties, the 369th, called "Hell Fighters" by the French and Germans, relentlessly continued the attack at dawn. Raked by enemy machine guns, they assaulted into the woods northeast of Sechault, flanking and overwhelming enemy machine gun positions. The "Le's Go!" elan and indomitable fighting spirit of the 369th Infantry was illustrated throughout the battle action. Their initiative, leadership and gallantry won for their entire Regiment the French Croix de Guerre.

The citation for the French Croix de Guerre with Silver Star was published in War Department General Orders 11, 1924, and reads as follows:

Under the command of Colonel Hayward, who although wounded, insisted on leading his regiment into combat; of Lieutenant Colonel Pickering, admirably cool and courageous; of Captain Cobb (killed); of Major Spencer (severely wounded); and of Major Little, a real leader of men, the 369th Regiment of American Infantry, under fire for the first time, captured some powerful and energetically defended enemy positions, took the village of Sechault by main force, and brought back six cannon, many machine guns, and a number of prisoners.