The Irish Brigade at Chancellorsville 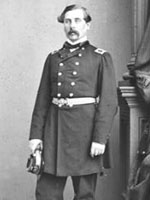 MAJOR: I have the honor to inform the major-general commanding the division that, in accordance with instructions received from him, I proceeded to this ford on yesterday forenoon, to relieve Colonel Kelly and take command of the brigade.

On arriving at the ford (where I found the Sixty-third encamped), I learned that Colonel Kelly had, an hour previous, proceeded to the United States Ford, at which place, I was advised by the major-general, two regiments of the brigade were to be stationed. Accordingly, I set out at once to the United States Ford, taking the corduroy road leading up from Banks' Ford to the Warrenton pike, being ignorant of the River road, not having either a map or guide to direct me. I proceeded along the Warrenton pike until I reached Hartwood Church, when I took the road leading to the United States Ford, at which I arrived some time about 5 p.m., and found everything perfectly quiet, and the Sixty-ninth and One hundred and sixteenth posted there in the best order. Colonel Kelly had left something more than an hour before to return to Banks' Ford. I concluded, therefore, on remaining at the United States Ford until this morning, it being too late for me to return to the lower one by the only route (that of the Warrenton pike) with which I was acquainted.

This morning, a little before 9 o'clock, the Twenty-eight Massachusetts Volunteers came in, having remained over night at Hartwood Church. As I was on the point of leaving for Banks' Ford, orders arrived for the regiments of the brigade stationed at the United States Ford to proceed to the former one. These orders were immediately put into execution, General Carroll's brigade, which reached the ground about the same time as the orders did, more than supplying their place. The Sixty-ninth, One hundred and sixteenth, and Twenty-eighth are expected very soon. I have relieved Colonel Kelly from the command, and have received from him all the instruction communicated to him as guidance for the command.

I have the honor to be, very respectfully, yours,

CAPTAIN: In accordance with orders from General Meagher, I have the honor to report as follows:

During the heat of the action, personal orders were received from General Couch to advance the brigade (then supporting the Fifth Maine Battery) through the woods in their front, but were immediately countermanded by him, and skirmishers ordered to be thrown out. I received orders then from General Meagher to throw out 50 men of the Twenty­eighth Massachusetts, under command of Captain Lawler, to be deployed to the right and left of a wood, passing through the wood on our extreme right, the men to be deployed so as to cover the front of the brigade.

On returning, I found that the fire which the enemy concentrated on the above battery compelled the men to desert the guns, the horses at the time being either all killed or wounded. On reporting the fact to General Meagher, I was ordered by him to tell Major Mulholland, of the One hundred and sixteenth Regiment Pennsylvania Volunteers, to save the guns with his men, at any risk, and too much praise cannot be bestowed on him for his own cool bravery, and that of the men under his command, having to take them out of stiff yellow clay, where the guns were stuck, and under a galling fire of the enemy, by which some 4 or 5 of his men were either killed or wounded; but he succeeded, most fortunately, in obeying orders, and drawing the guns, five in number, to within 1 mile of the pontoon bridge, where limbers were sent up, from the chief of artillery, to draw them to the extreme rear.

I have the honor to be, captain, most respectfully,

Report of Maj. St. Clair A. Mulholland, One hundred and sixteenth Pennsylvania Infantry.

SIR: In accordance with orders just received, I have the honor to submit the following report in regard to certain guns that were taken off the field of action by the men of my command, on the morning of Sunday, May 3, 1863:

The Irish Brigade was engaged in supporting the Fifth Maine Battery, commanded by Captain Leppien. When the battery had been engaged with the enemy about one hour, all the officers and [men] belonging to it had either been killed, wounded, or had abandoned their pieces, with the exception of one man (Corpl. James H. Lebroke), and all the guns were silenced except one. About this time, Major Scott, of General Hancock's staff, rode up to me, and requested me to bring out a sufficient number of men to haul the abandoned guns off the field, as they were in great danger of being captured by the enemy. My regiment at this time occupied the left of the brigade line, and was nearest the battery. I at once, at the request of Major Scott, led my men toward the abandoned battery, and ordered them to haul the guns off the filed, and to the rear. After taking off the last piece, I followed my men up the road, and found another gun in possession of one of my lieutenants (L. J. Sacriste, of Company D). This piece he had taken off without my knowledge, and made, in all, four pieces saved by my command. The fifth piece taken to the rear was taken off the field by some men of the One hundred and fortieth Pennsylvania Volunteers, and was by them taken up the road about 100 yards. There they were forced to halt, not having enough men to move the piece farther. I at once sent some men of my command to assist them, and the piece was brought off successfully. I found it necessary, in removing the guns, to order the men to leave their muskets, as they could to work with them in their hands. Seventy-three of my men did so. When the last gun was brought off, I went back to the left, to ascertain whether any more remained. I then found 8 or 10 of my men coming up the road, and ordered them back to gather up as many muskets as they could carry off. I do not think they succeeded in saving any. I was greatly assisted in bringing off the guns by Lieutenant Wilson, of General Hancock's staff, who acted with great bravery and personally assisted in removing the pieces. The following men of the Sixty-third New York Volunteers assisted in removing the guns: Sergt. James Dwyer, John Murray, John Coghlin, and Corpl. John Harvey. The following men of the Sixty-ninth also assisted: Sergt. Thomas Neelan, Privates William Lennon, Martin Morgan, James Quagly, and James Sheehan. The only man with the battery when we were ordered to remove the pieces off the field was Corpl. James H. Lebroke. He remained with his gun and assisted in bringing it off. This man acted with great bravery, and fired the last shot.