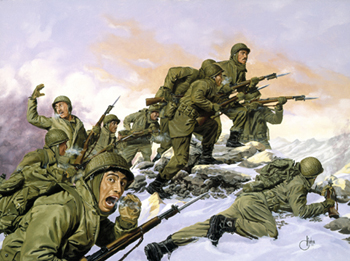 In August 1950 the Korean War was less than two months old, and Puerto Rico's 65th Infantry Regiment was on its way to the combat zone. The regiment landed at the port city of Pusan on the Korean Peninsula's southern tip, where U.S. forces had been holding a perimeter against the Communist North Korean invaders. Sent into action immediately, the Puerto Ricans took part in the U.S. breakout and drive to the north. Following the brilliantly planned and executed surprise landings at Inchon, U.S. and other United Nations forces drove deep into the mountains of North Korea. At that point a huge Chinese Army entered the war. The U.S. Eighth Army was overrun, and the 1st Marine Division, with attached U.S. and British Army Units, was completely encircled. In one of the greatest fighting retreats in history, the outnumbered Marines battled their way south to the coast. The first friendly troops they saw on the frozen ridgetops were the Puerto Ricans of the 65th Infantry Regiment, sent to hold the perimeter around the vital port of Hungnam. The Puerto Ricans supervised the evacuation of Hungnam, finally sailing themselves on Christmas Eve, 1950. The 65th landed in Pusan as they had five months before, and again fought their way northward. Late January 1951 found them south of the Korean capital of Seoul, under orders to take two hills being held by the Chinese 149th Division. The assault began on on January 31st, and took three days. On the morning of the third day the top of the hills were within reach, and two battalions of the 65th fixed bayonets and charged straight at the enemy positions. The Chinese fled. During its service in Korea, the men of the 65th Infantry won four Distinguished Service Crosses and 125 Silver Stars. The "The Borinqueneers" were also awarded the Presidential and Meritorious Unit Commendations, two Korean Presidential Unit Citations and the Greek Gold Medal for Bravery. The 65th Infantry Regiment's gallant service in a difficult war is exemplified by its regimental motto, "Honor and Fidelity," and the regiment itself exemplifies the National Guard's leading role in our nation's military history.