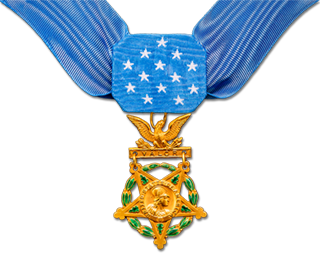 The Badge of Military Merit, as it was called, fell into oblivion until 1932, when General Douglas MacArthur, then Army Chief of Staff, pressed for its revival. Officially reinstituted on February 22, 1932, the now familiar Purple Heart was at first an Army award, given to those who had been wounded in World War I or who possessed a Meritorious Service Citation Certificate. In 1943, the order was amended to include personnel of the Navy, Marine Corps, and Coast Guard. Coverage was eventually extended to include all services and "any civilian national" wounded while serving with the Armed Forces.

Although the Badge of Military Merit fell into disuse after the Revolutionary War, the idea of a decoration for individual gallantry remained through the early 1800s. In 1847, after the outbreak of the Mexican-American War, a "certificate of merit" was established for any soldier who distinguished himself in action. No medal went with the honor. After the Mexican-American War, the award was discontinued, which meant there was no military award with which to recognize the nation's fighting men.

Early in the Civil War, a medal for individual valor was proposed to General-in-Chief of the Army Winfield Scott. But Scott felt medals smacked of European affectation and killed the idea.

The medal found support in the Navy, however, where it was felt recognition of courage in strife was needed. Public Resolution 82, containing a provision for a Navy medal of valor, was signed into law by President Abraham Lincoln on December 21, 1861. The medal was "to be bestowed upon such petty officers, seamen, landsmen, and Marines as shall most distinguish themselves by their gallantry and other seamanlike qualities during the present war."

Shortly after this, a resolution similar in wording was introduced on behalf of the Army. Signed into law July 12, 1862, the measure provided for awarding a medal of honor "to such noncommissioned officers and privates as shall most distinguish themselves by their gallantry in action, and other soldierlike qualities, during the present insurrection."

Although it was created for the Civil War, Congress made the Medal of Honor a permanent decoration in 1863.