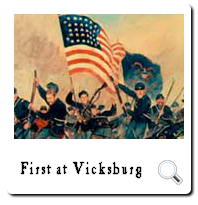 Confederate Lines, Vicksburg, Mississippi, 19 May 1863. In this assault against bitter resistance the 1st Battalion, 13th Infantry, lost forty-three percent of its men, but of the attacking force, it alone fought its color up the steep slope to the top. General Sherman called its performance "unequalled in the Army" and authorized the 13th Infantry to inscribe "First at Vicksburg" on its color. Although it took two more months of hard fighting to capture Vicksburg and split the Confederacy, no episode illustrates better the indomitable spirit of Americans on both sides. 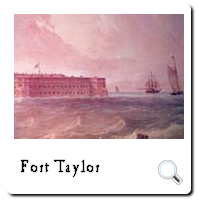 Fort Taylor now stands on Key West. The island became U.S. property when the Navy hoisted an American flag over it in 1822. The Army established a barracks on the north shore of the island in 1831, and in 1845 construction of Fort Zachary Taylor began on the southwest side, on a sandy shoal about 400 yards offshore. Three of the fort's four bastions overlooked and controlled the water approaches to Key West. When the Civil War began in 1861 the post was ready to be garrisoned, and Union forces occupied it during the entire war.

Between the end of the Civil War and the end of the nineteenth century, the Army periodically abandoned and then reopened the installation. In 1870, for example, the Surgeon General reported that the quarters "are not in good condition" and that "the fort is occupied only by a guard." A modernization program between 1898 and 1905 reduced the fort's original three stories to one so that modern coast artillery could be mounted on the original bottom tier. As shown in Eastman's painting, water completely surrounded the fortress during most of its existence, but in the mid 1960s the Navy dredged and filled the area between the fort and Key West, making the installation an integral part of the island. Fort Taylor became a National Historic Landmark in 1968.

Among the many militia regiments that responded to President Lincoln's call for troops in April 1861 was the First Minnesota Infantry. As the First Union regiment to volunteer for three years of service, the First Minnesota fought at the battles of Bull Run, Antietam and Fredericksburg. It was, however, during the Battle of Gettysburg that the First Minnesota played a significant role in American military history. On the morning of July 2, 1863, the First Minnesota, along with the other units of the II Corps, took its position in the center of the Union line on Cemetery Ridge. Late in the day, the Union III Corps, under heavy attack by the Confederate I Corps, collapsed creating a dangerous gap in the Union line. The advancing Confederate brigades were in position to breakthrough and then envelope the Union forces. At that critical moment, the First Minnesota was ordered to attack. Advancing at double time, the Minnesotans charged into the leading Confederate brigade with unbounded fury. Fighting against overwhelming odds, the heroic Minnesotans gained the time necessary for the Union line to reform. But the cost was great. Of the 262 members of the regiment present for duty that morning, only 47 answered the roll that evening. The regiment incurred the highest casualty rate of any unit in the Civil War. The gallant heritage of the First Minnesota is carried on by the 1st and 2nd Battalions, 135th Infantry, Minnesota Army National Guard.

* As per the National Guard Heritage Series website, use or reproduction of this print by entities other than the U.S. Government is reserved by the artist. Please contact Don Troiani at HistoricalArtPrints.com.”

The 54th Massachusetts Volunteer Infantry Regiment was recruited in the spring of 1863 by Governor John Andrew, who had secured the reluctant permission of the War Department to create a regiment of African-American soldiers. Like all Massachusetts Civil War soldiers, the 54th's men were enlisted in the Massachusetts Volunteer Militia. These Guardsmen would serve as a test case for many skeptical whites who believed that blacks could not be good soldiers. The battle that proved they could was fought on Morris Island, at the mouth of Charleston Harbor. Following three days of skirmishes and forced marches with little rest, and 24 hours with no food, the regimental commander, Colonel Robert Gould Shaw, requested the perilous honor of leading the attack of Fort Wagner, a sand and palmetto log bastion. As night fell, 600 men of the 54th advanced with bayonets fixed. Despite withering cannon and rifle fire, the men sustained their charge until they reached the top of the rampart. There, Colonel Shaw was mortally wounded. There, also, Sergeant William Carney, who had earlier taken up the National Colors when the color sergeant had been shot, planted the flag and fought off numerous attempts by the Confederates to capture it. Without support, and faced with superior numbers and firepower, the 54th was forced to pull back. Despite two severe wounds, Sergeant Carney carried the colors to the rear. When praised for his bravery, he modestly replied, "I only did my duty; the old flag never touched the ground." Carney was awarded the Medal of Honor for his actions, the first African-American to receive the award. The 54th Massachusetts suffered 270 casualties in the failed assault, but the greater message was not lost: some 180,000 African-American soldiers followed in the footsteps of these gallant Guardsmen, and proved that African-American soldiers could, indeed, fight heroically if given the opportunity.

The Battle of Gettysburg, the largest battle ever fought in the Western hemisphere, is often called the turning point of the Civil War. The battle was a narrow victory for the Union and could have been a Confederate victory if it were not for a series of critical events. One such episode involved the 20th Maine Infantry. Organized in the Maine Volunteer Militia in August 1862, the 20th Maine mustered into Federal service several weeks later. Assigned to the Army of the Potomac, the regiment fought in the Antietam, Fredericksburg, and Chancellorsville campaigns. At Gettysburg, the 20th was commanded by Colonel Joshua L. Chamberlain, a former professor at Maine's Bowdoin College. After marching all day and night to reach Gettysburg, the regiment was ordered late in the afternoon of July 2 to occupy critical terrain between two hills, Big and Little Round Top. Chamberlain was ordered to hold this position on the extreme left flank of the Union line at all costs; if outflanked by the Confederates, the entire Union position would be in jeopardy. It was not long before the 15th and 47th Alabama Regiments attacked. The 20th Maine held off six attacks by the determined Alabama men, but Colonel Chamberlain knew that his regiment, low on ammunition, could not withstand a seventh. He therefore ordered a counterattack with fixed bayonets, and the 20th charged down the slopes of Little Round Top into the startled Confederates and broke their attack. The 20th Maine took 400 prisoners and stopped the Confederates threat to the Union flank. The crucial role these Maine militiamen played in the Union victory at Gettysburg exemplifies the military qualities of leadership, initiative, unit cohesion and gallantry. Joshua Chamberlain was awarded the Medal of Honor for his actions of July 2, 1863. At Appomattox Courthouse almost two years later, it was Brevet Major General Chamberlain, chosen to accept the Confederate surrender, who ordered Union troops to present arms to their former enemy as a mark of respect. After the war Chamberlain was elected Governor of Maine, and completed his military career as a major general in the Maine National Guard. The heritage of the 20th Maine is carried on today by the 133d Engineer Battalion, Maine Army National Guard.

Originally organized in 1809, in 1861 the 9th Illinois Infantry responded immediately to the call of President Lincoln, a company commander in the regiment during the Black Hawk War. Many of those who mustered in were German immigrants. The 9th was at Shiloh, Tennessee on April 6, 1862 when the Confederate Army of the Mississippi struck at dawn. Some Union regiments fled in panic as Major General U.S. Grant ordered his division commanders to hold at all costs. Sent to reinforce the Union left, the 9th was told "There is going to be plenty of fighting today; there must be no cowards." South of the Peach Orchard, the regiment was ordered to a tree-choked ravine, and found themselves in a race with Confederates for the same natural barrier. The 9th got there first. Confederate commander Albert Sidney Johnston remarked on the Illinois regiment's stubborn stand" as the 9th Arkansas and 29th Tennessee joined the fight. Finally, renewed attacks collapsed the 12th and 15th Illinois on the 9th's flanks and with their dead and wounded thick on the ground, the regiment had to withdraw. The 9th suffered 103 killed and 258 wounded on Shiloh's first day, one of the highest totals of the entire Civil War. Their 90-minute stand helped save Grant's left, and prepared the way for the great Union Counterattack the next day. The proud heritage of the 9th Illinois is carried on today by the 130th Infantry Regiment, Illinois Army National Guard.

The following are selected artwork from the Army Art Collection. Please click here for additional information about the Army Art Program.


“Rudolph Ellis of Philadelphia as Officer of the Day”
by Jefferson Chalfant
Circa 1864, Civil War

"Battle Of Chattanooga or Look Out Mountain"
James Walker

"Capture of the Works at Petersburg"
Thomas Nast